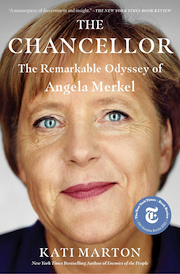 This book tells the fantastic story of Angela Merkel as told by her official biographer. It covers her family history (growing up in East Germany), her rise to political power, and her years as Germany’s Chancellor; many of those years spent as the de facto leader of Europe and the free world.

The biographer Marton describes many of Merkels’ great successes and her flaws and stumbles. This book is well-written, and the only criticism I would offer is how the book is organized; at times, it is confusing when there are flashbacks that seem to overlap with parts of the story that has already been told.

One of the things that I found fascinating about Merkel was how her isolation in East Germany gave her a fresh and insightful perspective on the politics of the western world when the wall fell. She was not encumbered with the baggage of a western education about the history of Europe, and that allowed her to understand European political relationships more clearly.

Indeed, Merkel was not perfect. The way she explained her handling the refugee crisis led to the rise of the AFD, and her preference for austerity instead of punishing reckless bankers and politicians during the Greek and Eurozone emergencies caused much misery for innocent citizens in southern Europe. Yet, she is a remarkable leader, and her influence will last for decades, if not centuries.