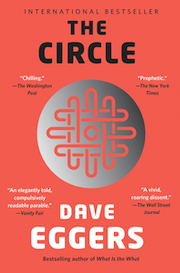 Don’t be put off by the lousy movie adaptation of The Circle (16% on Rotten Tomatoes despite a cast that includes Tom Hanks, Emma Watson, Karen Gillan, John Boyega). The Circle is a page-turner, especially for those who have been following the rise of social media and its influence on our culture and lives. While not technical, this book does an excellent job of educating the reader on the techniques these large firms deploy to make us click, buy, and like.

The story is set at a large social media company (The Circle, aka Facebook in disguise) where a young woman, Mae Holland, goes to work. As she learns more about how The Circle manipulates people, uses their data, and The Circle’s plan for global dominance in everyone’s life, we are led to believe that we see a revolution starting to foment in Mae’s mind. But perhaps she has a different plan…..

The Circle also does an excellent job of illustrating and making fun of the gravity that we give to our opinions on social media and the possibility that we are doing anything that matters by being on these platforms; platforms like Facebook certainly want us to think our time spend it is important! Consider the following passages:

And, with the tools the Circle made available, Mae felt able to influence global events, to save lives even, halfway across the world. That very morning, a message from a college friend, Tania Schwartz, came through, pleading for help with an initiative her brother was spearheading. There was a paramilitary group in Guatemala, some resurrection of the terrorizing forces of the eighties, and they had been attacking villages and taking women captive. One woman, Ana Marfa Herrera, had escaped and told of ritual rapes, of teenage girls being made concubines, and the murders of those who would not cooperate. Mae’s friend Tania, never an activist in school, said she had been compelled to action by these atrocities, and she was asking everyone she knew to join in an initiative called We Hear You Ana Marfa. “Let’s make sure she knows she has friends all over the world who will not accept this,” Tania’s message said.

Mae saw a picture of Ana Marfa, sitting in a white room on a folding chair, looking up, expressionless, an unnamed child in her lap. Next to her picture was a smile button that said “I hear you Ana Marfa,” which, when clicked on, would add Mae’s name to a list of those lending their support to Ana Marfa. Mae clicked the button. Just as important, Tania wrote, is that we send a message to the Paramilitaries that we denounce their actions. Below the picture of Ana Marfa was a blurry photo of a group of men in mismatched military garb, walking through dense jungle. Next to the photo was a frown button that said “We denounce the Central Guatemalan Security Forces.” Mae hesitated briefly, knowing the gravity of what she was about to do—to come out against these rapists and murderers—but she needed to make a stand. She pushed the button. An autoresponse thanked her, noting that she was the 24,726th person to send a smile to Ana Marfa and the 19,282nd to send a frown to the paramilitaries. Tania noted that while the smiles were sent directly to Ana Marfa’s phone, Tania’s brother was still working on a way to get the frowns to the Central Guatemalan Forces.”