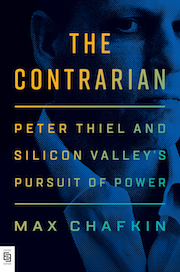 In the epilogue of this book, author Max Chafkin includes quotes from Thiel’s friends who discuss Thiel’s better qualities and new role as a husband and father. To discount these positive remarks, Chafkin tells readers that “One of Thiel’s talents is to present a canvas onto which others can ascribe their own ideas.”

Ironically, Chafkin uses the canvas of his writing to present his idea that Thiel is a one-dimensional tech-bro who doesn’t understand tech and manages to luck into money or force his way into it by being a jerk. I don’t know enough to judge if Thiel is good or evil, but I do know that he is a much more profound thinker than Chafkin presents.

Chafkin delights in Thiel’s missteps and points to them as examples that Thiel doesn’t understand what is going on in the tech world. For instance, Thiel cashed out a large portion of his Facebook stock after the IPO. That stock has increased in value substantially since. However, hindsight is 20/20, and it was entirely reasonable to harvest a significant return (638 million-plus or minus) when it was first possible and eliminate the risk that it would decline. At the time, facebook’s dominance was not a sure thing, and selling was a good strategy. When Thiel does the same with Palentar after its IPO, again harvesting 100s of millions, Chafkin sees a pattern of poor decision making. I wish I could be so stupid…

Besides the author’s bias, there are numerous errors or exaggerations. I have read and re-read Ryan Holiday’s book “Conspiracy” about Thiel’s efforts (eventually successful) efforts to take down Gawker. Chafkin claims that Holiday fawningly compares Thiel to various leaders (Eisenhower, Patton, etc.). Holiday doesn’t. He relates the principles that those leaders used when dealing with conflict and draws parallels to the situation with Gawker. He doesn’t say that Thiel is comparable to these leaders.

I am not a fan of this book, but parts of Thiel’s timeline filled in for me. If you are super interested in the life of tech leaders and are willing to read with a skeptical eye about the options of the author, then check it out. Otherwise, skip it.