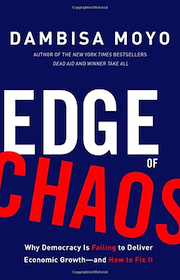 Since I am not an economist or a finance expert, I found this book an interesting introduction to the relationships between economic growth, democracy, and technology.

In the past century, humans have transitioned from living in isolated regions and countries (some such as Japan, which was isolated for a long time) to a globalized society where capital, labor, and production can flow freely between nations. Or at least some of the time. One of Dambisa’s main arguments is that globalism was never fully implemented, but instead, “a globalism lite” approach was taken. Therefore, globalism’s benefits were not fully realized for everyone but instead flowed mainly to those already well off.

She makes some fascinating points about inequality and democracy and the rise of authoritarian states such as China. China’s Belt and Road initiative does not force other countries to adopt democracy and adopt policies for human rights (or China’s governmental norms) before joining trade and other enterprises.

This book is about three years old. The last two chapters are somewhat “pie in the sky” ideas about reforms to democracy, many of which are antithetical to the American form of democracy. It’s not that she’s wrong, but I don’t see any possibility in my life for these proposals to get implemented.

For me, the big takeaway was about automation. Many of you are familiar with the Tragedy of the Commons, a famous science article written by Gannett Harding, in which he describes the use of shared resources and lack of incentive that people have to conserve a common resource when it can benefit themselves. There’s are some flaws with Harding’s ideas, but the main theme seems to hold.

Moyo hints that wages are a kind of commons resource and that when a company embraces automation, at a very large scale, they may be taking away the common resources of wages and driving up unemployment to such a degree that it devastates the commons (aka the national or global economy). In this post-pandemic world, one company may be motivated to embrace a high level of automation and artificial intelligence applications to the detriment of our economy, democracy, and our ability to address global problems.

Amazon Link: The Edge of Chaos