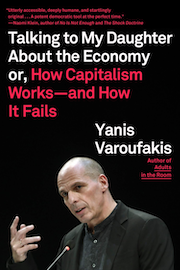 This short book offers a rapid and accessible introduction to economics, money, the banking system, and why human economic and political history has unfolded as it has so far. Varoufakis also does a great job of showing how the richest and most powerful of our species maintain power and control by bending our democratic institutions to their will. Along the way, he busts several myths and uses mythology, science fiction, and literature to provide memorable lessons and analogies.

In this extended letter to his daughter, Professor Varoufakis also casts his eye on the challenges on the immediate horizon, such as heightening automation may inadvertently shut down the recycling of commodities and money:

First automation of production pushes costs down. Second, the ruthless competition between producers stops them from charging prices above their falling costs. This has the effect of squeezing profits to a bare minimum. Third, the robots that have replaced human workers do not spend money on the products that they help produce. This has the effect of reducing demand…That’s the moment when, like Icarus, market society finds its wings melting.

He emphasizes the failing of economists and economic theories, which are explained away with another theory when found to be lacking or unable to predict outcomes.

Whenever they fail to predict properly some economic outcome, which is almost always, they account for their failure by appealing to the same mystical economic notions that failed them in the first place. Occasionally new notions are created in order to account for the failure of the earlier ones.

Most importantly, this book offers a clear call to action by young people. If you want to address climate change, pandemics, education, or human rights, you can’t leave the economy up to the economists.

..the truth is that there are no real experts, and the economy is too important to leave to the economists. As we have seen in this book, economic decisions decide everything from the mundane to the profound. Leaving the economy to the experts is the equivalent of those who lived in the Middle Ages entrusting their welfare to the theologians, the cardinals, and the Spanish Inquisitors. It is a terrible idea.

I ordered four copies to have on hand to give out to students (I also keep extra copies for Scott Adam’s “How to Fail at Almost Everything and Still Win Big” in my office). This is a good primer on economics. And the author does an excellent job of pointing out where his ideas and opinions differ from those of other economists. Highly recommend.