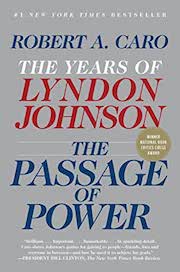 The Passage of Power: The Years of Lyndon Johnson, Vol. IV by Robert A. Caro.

Caro is the definitive biographer of Lyndon Johnson and an excellent writer to book. I listened to Master of the Senate a long time ago, and this book covers the next chapter in Johnson’s life: his transition from Majority Leader to Vice-President to President. Johnson was the best one-on-one politician there has ever been in American Politics. That was a great advantage (passing the voting rights act, Medicare, etc.) and a significant disadvantage in some situations (Vietnam). However, this book is also about the Kennedys and particularity about Robert Kennedy, who hated Johnson with a passion that drove him to make some irrational decisions. For those who didn’t live through this time, it is hard to understand how quickly significant events happened in the early 60s: Kennedy’s election, the Cuban missile crisis, the assassination, etc. A lot happened in the time from Jack Kennedy’s death to the 64 election. If you have any interest in politics or history, I think this is a must-read/must-listen.

Note: this is the fourth in a series of five planned books. Caro has stated that he has about 600 pages of the last book complete, but it will take two to ten years to complete. Caro is now 84, and many of his fans are worried that it might not get completed and were particularly peeved when he took the time to write a book about writing in 2019 (“Working”).