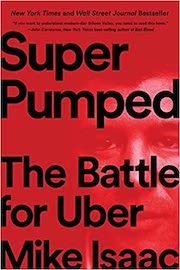 SuperPumped, the Battle for Uber by Mike Isaac (Amazon Link).
This book is a very well-written chronology of Uber from its start to its IPO. Described along the way are Ubers many sins and crimes, including the downfall of its founder/CEO Travis Kalanick. I started following the Uber story in 2017 when Susan Fowler’s blog post began to pull back the curtain on the toxic culture that the bros of Uber had created, so this book provided some excellent insight about the years leading up to that shocking report.
One lesson that Uber learned early on was is that it doesn’t matter if a state or city has a law or regulation against a practice that Uber wanted to deploy. What matters is if that law or regulation is enforced or not. And of course, when the law was enforced, Uber used technology tools that they build to make sure that authorities could not monitor Uber activities (the so-called Greybar application).
Since its IPO, Uber stock has not done particularly well, and I predict it will decrease by another 20% in the next six months. Uber was overvalued Pre-IPO thanks to Softbank and Saudi Arabia’s money (who, according to the new Uber CEO, have also made some “mistakes” when dealing with journalists).

Uber’s stock price could dramatically increase if they can figure out: self-driving cars or a multi-modal planning system for transportation, such that you could use your Uber app to plan a trip to attend a conference in Portland and the app would book a ride to the airport, your airline ticket, a hotel in Portland and an uber to get back and forth, etc. etc.
Only time will tell. (Full disclosure, I have several brilliant former students who work at Uber. If they are making some of the strategic decisions, then Uber has a good of a chance at recovering and going on to many great things.)
Amazon Link: https://amzn.to/3olSz6i