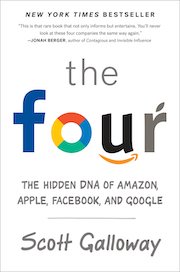 I have fallen in love with Professor’ Galloway’s lectures and “Winners and Losers” videos on youtube. His lectures have caused me to change my outlook on brands and retail competition in the era of Amazon. His new book is a brilliant and insightful look at how Apple, Google, Amazon, and Facebook have appealed to our most basic needs and desires: Sex (Apple), God (Google), Consumption (Amazon), and Love (Facebook). It also made me change my mindset and stop thinking of Apple as a technology company. Apple is a luxury brand with margins on par with Ferrari. Some other quotes and observations from the book:

Galloway lays out why higher education is ripe for disruption and how a company like Apple could put their wealth toward such an effort with great impact, but probably won’t.

Both Facebook and Google stated, earlier in the decade, that they would not share information across silos (Facebook to Instagram, Google to Gmail to YouTube to Double-Click). However, both lied and have quietly changed their privacy policies, requiring a specific request to opt out if a user doesn’t want to have their movements and activity cross referenced with other platforms and searches. “There is no evidence of any intent beyond the data being used for better targeting. Creepy and relevance are strongly correlated in the world of digital marketing. To date, consumers and advertisers have voted with their actions and have expressed the creepy is a price worth paying for the relevance.”

“Uber has recognize that if an industry is broken enough, consumers will conspire to violate the law in favor of a far preferable service. And, in the long run, do you really think Congress is going to fight both Wall Street and millions of consumers?”