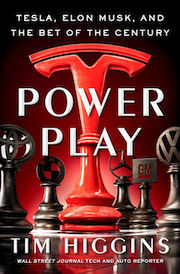 Power Play is an exceptionally well-researched book that starts in the early 2000s with the notion that if one strings a bunch of laptop lithium-ion batteries together, it will be a great way to create an electric car. A lot of the story revolves around founders Martin Eberhard and Marc Tarpenning and battery genius J.B. Straubel. However, this book is mainly about Elon Musk, and the entire story is told in his shadow. Tyrant or Genius? Skillful Leader or just lucky?

The reader is generally on their own to decide, but Higgins doesn’t hold back from pointing out where Musk’s rash behavior caused problems with the culture and production schedule. And when Musk seemed incapable of learning from previous mistakes (often because he didn’t think that he had made any mistakes, someone else was to blame), lessons from one production hell were not learned, so another production hell was always on the horizon. For example, even after producing the Model S and Model X, the Model 3 production line started without any standardized assembly method for workers or quality control along the line.

While I realize that it is stupid to short a story stock like Tesla, this book makes me think that Musk’s empire might be in more danger than it appears. Meanwhile, I will definitely NOT be considering a Telsa when we get our first electric vehicle.

BTW, the author, Tim Higgins, is a graduate of the Missouri School of Journalism and a reporter for The Wall Street Journal.