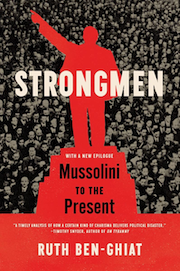 An excellent book that analysis the “formula” that strongmen (they are always men) like Mussolini and Putin use to rise to power and stay in control. This book is well-researched and relevant at any time, but Strongmen is particularly informative as Putin’s war against the Ukrainian people rages. Putin seems to be following Mussolini’s model, whose empire-building war(s) in North Africa bankrupted Italy but allowed him to rally the Italian people and deepen his grip on power. After reading this book, it has further convinced me that regime change in Russia is improbable and Putin will be around for many years.

The book also highlights how the Strongmen, while more common in the past, poss even greater danger to the modern, globally interdependent world in which we live. “With climate change likely to cause increased levels of disease and scarcity, the spread of the strongman style of rule doesn’t just endanger democracy, but also poses an existential threat.”

Authoritarianism has been reputed to be an efficient mode of governance, but my study of the dynamics and costs of personalist rule shows that the opposite is true. If the leader or his inner circle is under investigation, governance revolves around his defense, with time and resources focused on exonerating him and punishing those who might expose him, like prosecutors and journalists. Killing dissident elites and driving entire families into exile squanders generations of talent. Seizing or ruining profitable businesses, some built up over decades, hurts the economy. Far from being a productive force, illiberal rule has had devastating consequences for the earth and many millions of its inhabitants.

The book is organized into three parts: Getting to power, Tools of Rule, and Losing power. In each, the author provides a case study of how Strongmen gain, use, and lose control of a people. The book starts with a helpful list of protagonists for keeping track of the cast of characters from chapter to chapter.

For a taste, here is Ruth Ben-Ghiat speaking at an event sponsored by The Eisenhower Institute.