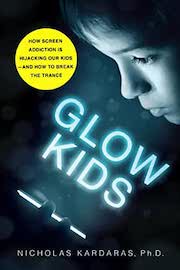 Just like cocaine and other drugs, some proportion of the population is highly susceptible to online addiction. Many of our online experiences are designed to deliver a dopamine release to encourage addictive behavior. Think of the infinite scrolling common to social media. The effect of this constant stimulation is not good, and the research points to a hazardous impact on the brains of children and teens whose brains are still developing.

“Our brains are simply not designed for the visual hyperstimulation with which recently developed digital technology bombards us.”
-Page 18

One of the things that I re-discovered in this book (I forgot things!) was how many technologists limit the time that their kids spend on on-screen.

“..ironically, the most tech-cautious parents are the people who invented our iCulture. People are shocked to find out that tech god Steve Jobs was a low-tech parent; in 2010, when a reporter suggested that his children must love their just-released iPad, he replied: “They haven’t used it. We limit how much technology our kids use at home.”
-Page 31

I highly recommend this book, especially for those with young children or who are planning on having some! The author’s style of writing might not appeal to everyone. He is sometimes too wordy, for example, taking time to tell you whenever he intends for something to be a pun or not to be a pun, but the book also has lots of great examples and stories that help bring you along.