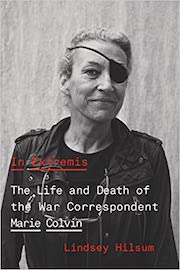 In Extremis: The Life and Death of the War Correspondent Marie Colvin by Lindsey Hilsum. Great book and excellent audio narration. Tells the sometimes sad, fast-paced, and intense life of Marie Colvin. I know several films have been produced about Ms. Colvin (focusing on her last days in Syria), but I can’t imagine that they paint as vivid and fascinating portrait as Ms. Hilsum does in this book. I learned a lot, and it confirms a lot that I had suspected about this particular journalistic niche. The death of Marie Colvin’s death was controversial in the journalism profession. Many thought that her paper and editors pushed her or allowed her to take too many extreme risks. As a result, some news outlets have pulled back their reporting in war zones. This lack of reporting has probably hurt the lives of thousands of civilians and refugees throughout the world by decreasing the coverage and public knowledge of their plight.